The Bern station of the future

Expansion work is now being planned for Bern station so that it can continue to fulfil its functions and serve as a transport hub in future. Bern railway station is the second largest in Switzerland and it plays a key role in domestic and foreign railway traffic. It is starting to reach its limits in terms of operational and physical capacity. 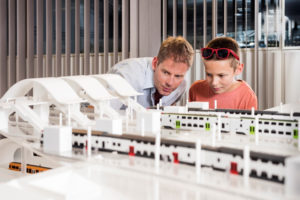 The expansion of Bern station is being divided into two steps. Between now and 2025, SBB and RBS will be working on two large projects:

The City of Bern plans to reorganise the traffic arrangements around the station between now and 2025 in conjunction with the expansion work. This will help to transport the rapidly growing numbers of passengers to and from the station quickly and safely, as well as improving the infrastructure for tram and bus services as well as pedestrians and cyclists.

In the second expansion phase, SBB plans to expand the station out to the sides by 2035. This will include four additional platforms under the “Grosse Schanze”, enabling SBB to further expand its regional and long-distance services by 2035.

The existing RBS station in Bern was opened in 1965. Originally designed for around 16,000 passengers a day, it is now used by up to 60,000 people every day. The capacity of the new RBS station will be sufficient for current needs as well as the forecast development in demand. 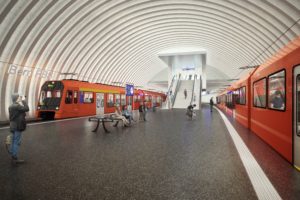 The new RBS station will have four tracks and will be built underneath the existing SBB station. It will consist of two large underground halls, each with two tracks and a 12-metre-wide central platform.

There will be escalators and lifts from platform level to the RBS concourse. From there, passengers can reach the platforms for long-distance and S-Bahn services or exit into the city.

Trains will pass through a new two-track tunnel in the RBS station, coming in at just under one kilometre long. This new tunnel will branch off from the existing RBS Schanze tunnel and will mainly run beneath road and railway areas.

How much the new RBS station in Bern costs

The investment costs for the new RBS station in Bern come to around 614 million Swiss francs. As with all railway infrastructure, these costs will be covered by the federal government and the cantons involved.

How the new RBS station in Bern is being built

Construction on the new RBS station began in the first half of 2017. The station will be opened in 2025. You can find detailed information on the German website.

In 2025, SBB will be opening an additional pedestrian underpass – the “Mitte” underpass – with two new station entrance points: the “Bubenberg” entrance at the Bubenberg Centre, and the “Länggasse” entrance. This will give commuters more space and shorten their journeys.

The new “Mitte” underpass will enable passengers arriving from the Länggasse area or Hirschengraben to reach the SBB and RBS stations quickly without having to take any detours. The new underpass will also shorten routes around the station, thereby reducing congestion in the existing underpass, the “Welle” overpass and the station forecourt. A wide variety of new shops will add to the services on offer at the station. 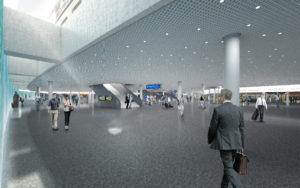 Bern station is getting a second fully fledged main entrance in the form of a new access point from the Bubenberg Centre.

SBB is taking a variety of steps to make Bern station more attractive:

More space for pedestrians on Bubenbergplatz

With this new station access point, the Bubenbergplatz will be traversed by even more people in future, fundamentally changing the requirements of the immediate area from a traffic perspective. For this reason, the City of Bern is planning a comprehensive package of measures.

In conjunction with the expansion of the station, it plans to reorganise traffic immediately around the station and adjust the direction of travel in the wider area through accompanying measures between now and 2025. This particularly includes reorganising pedestrian walkways and lanes and routes used by traffic. The possibility of a pedestrian underpass at Bubenbergplatz will also be investigated.

Tell us what you think!

Send a tweet now!
We use cookies to ensure that we give you the best experience on our website. If you continue to use this site we will assume that you are happy with it.OKPrivacy policy